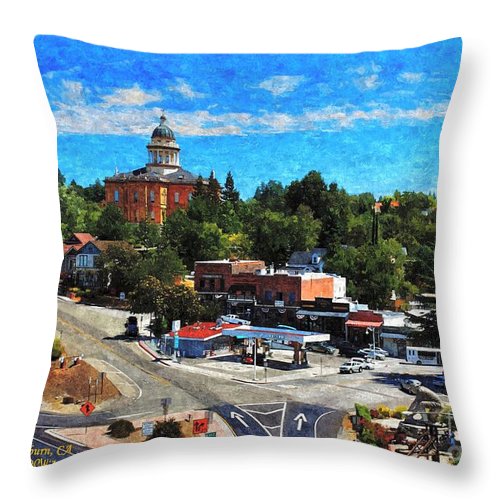 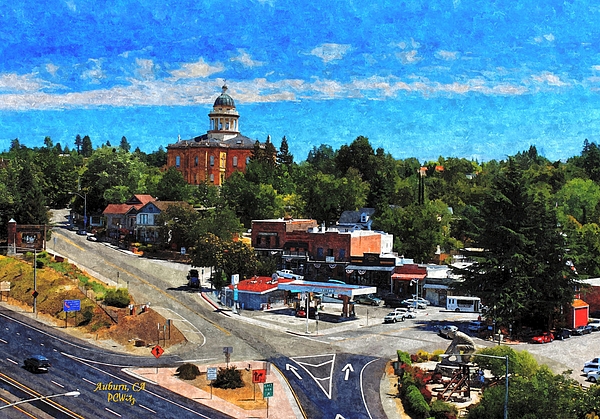 Boundary: Bleed area may not be visible.

Click and drag to re-position the image, if desired.

The watermark at the lower right corner of the image will not appear on the final product.

The image is near the edges of the product but doesn't cover the entire product.   Some of the background color may appear around the outside edges of the image.

Our throw pillows are made from 100% spun polyester poplin fabric and add a stylish statement to any room. Pillows are available in sizes from 14" x 14" up to 26" x 26". Each pillow is printed on both sides (same image) and includes a concealed zipper and removable insert (if selected) for easy cleaning.

This digitally modified photo of Auburn, CA was taken from an Amtrak railcar on the railroad trestle over I-80 exit looking towards the historic... more

Patrick, Outstanding!...Congrats on your sale!

Thank you Chrisann, Auburn, CA is a wonderful little town.

Patrick love the scene of the place I spent some time. I roomed at the IVY HOUSE which is probably gone.

Thank you Bob for the coment... drop me an email with the Ivy House location and I'll check.

Congrats on your sale!!

This digitally modified photo of Auburn, CA was taken from an Amtrak railcar on the railroad trestle over I-80 exit looking towards the historic district and courthouse. Claude Chana discovered gold in a ravine May 16, 1848. Placer mining in the Auburn area was very good, with the camp first becoming known as the North Fork Dry Diggings and soon the area developed into a mining camp. It was officially named Auburn in August 1849. By 1850, the town's population grew to about 1500 people, and in 1851, Auburn was chosen as the seat of Placer County. In 1865, the Central Pacific Railroad, the western leg of the First Transcontinental Railroad, reached Auburn as it was being built east from Sacramento toward Ogden, Utah. Artistic mixed media digital painting of an original photographic image. Group Features: * 500 Views Group...12/22/2014 * California Gold Country,,01/29/2015

Patrick is an Accomplished Eclectic Photographer, Published Freelance Writer, Author, Artist, and Teacher. Patrick moved his family to the Northern California foothills to live among the trees, wild animals, and picturesque landscapes. Pat has been involved with photography since goofing-off in his High School photography class. He started with a used 35mm Minolta camera, wore out a few more 35mm cameras, and progressed into digital. His love of photography is evident in the volumes of photos seemingly documenting everything on film in the past and digitally today. Pat’s camera is always nearby, as his wife and daughters can both happily and sadly corroborate, “Dad’s taking pictures again!” His photos include…birth through...