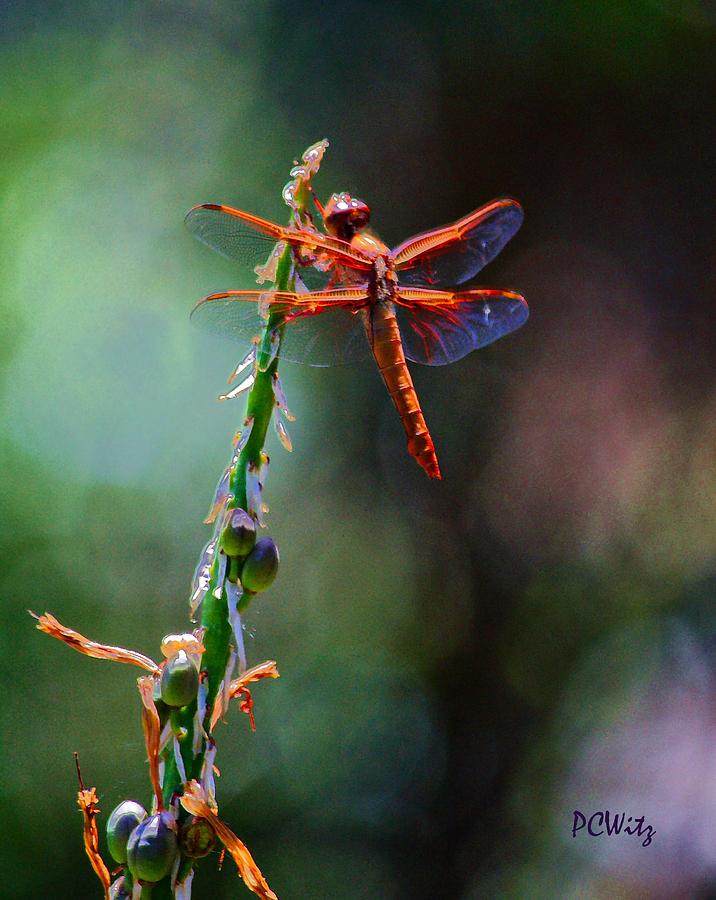 An ill elderly Japanese gentleman was admitted to the hospital and was critically ill (I was told, 1 in 5 chance of surviving). His brother saw this framed image in the Hospital's Art Can Heal Gallery, determined it was good fortune to have run into it, and asked if the image could be put in the room with his ill brother. I was told later that the red dragonfly (Aka Tombo) in the Japanese culture represented renewal, positive forces and power of life, and is as well associated with good luck, prosperity, peace, and harmony. Long story short, the picture moved with him and remained in his room through five major surgeries (including the ICU's). The elderly gentleman to all the doctors' surprises got better and the good luck photo now hangs in the man's home. His daughter indicated the Red Dragonfly had deep meaning in their family and that the picture literally gave her father the fortitude and will to stay alive through all that he went through. Artistic mixed media digital painting of an original photographic image.

Thank you Gail for the compliment and vote, it's greatly appreciated. I'm thrilled, just sold a framed 16x20 at the "Art Can Heal" exhibit.

Thank you Ginger for the kind compliment. I currently have the image on exhibit again in a local Hospital "Art Can Heal" gallery.

Thank you Steven for the v

Patrick I read this wonderful story of yours in the HEALing THrough Art Contest GALLERY's facebbok album, and had to also come here and tell you how much I enjoyed reading it!! What a wonderful demonstration of the healing power of beauty, and of faith! :) Wonderful!!

Thank you Stav... I was shocked by the news. The situation involving the image is the absolute epitome of what the Art Can Heal exhibit is all about... I was originally told the gallery lifted the mood of hospital visitors, patients, and the staff...never in my wildest dreams would I have imagined that one of my images would actually save a life!

Thanks Gary... I'm glad it turned out well. At first glance in the camera, I wasn't sure if it was going to work... slight adjustment and wow, I was surprised. It's now one of my favorites.

This looks excellent, dude! Just the right amount of effects, I think.